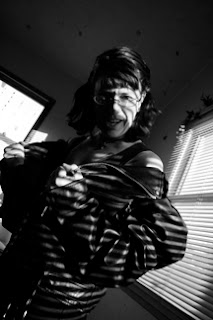 Couple of folks have asked the stories behind my tattoos, so inspired by Trinity I decided to post bloggettes on each, then you can vote on your favorites. I started getting inked at 18, average one a year, and now have 27 totaling about 60 hours of work from nine different artists.
Not my first, but if I only had one tattoo - it would be this one, Double Happiness. Tattooed in red above my heart, it is a symbol of hope and wholeness.

I do not believe in Plato’s concept that our soul’s are split apart at birth, and we search the earth for other other half - usually we think the better half.

When I look down my chest, it looks like the double venus sign, but more than that, like two dancing figures wearing funny hats. Double the pleasure, double the fun - I know, I sound like a gum commercial...

In the ancient Tang Dynasty, there was a student who was on the way to the capital to attend the national final examination, in which the top learners would be selected as the ministers in the court. Unfortunately, he fell ill halfway when he passed through a mountain village. Thanks to a herbalist doctor and his daughter, he was taken to their house and treated well. He recovered quickly due to the father and the daughter's good care. Well, when he had to leave, he found it hard to say good-bye to the pretty girl, and so did she. They fell in love. So the girl wrote down the right hand part of an antithetical couplet for the student to match:

"Green trees against the sky in the spring rain while the sky set off the spring trees in the obscuration."

"Well, I can make it though it is not easy. But you'll have to wait till I have finished the examination." replied the student. The young girl nodded in significance.

"Red flowers dot the land in the breeze's chase while the land colored up in red after the kiss."

The young man realized immediately the right part of the couplet by the girl was the perfect fit to the emperor's couplet, so he took the girl's part as the answer without hesitation. The emperor was delighted to see the matching half of his couplet was so talent and harmonious that he authorized the young man's identity as Minister in the court and allowed him to pay a visit to his hometown first before holding the post. The young man met the girl happily at home and told her the emperor's couplet. They soon got married. For the wedding, the couple DOUBLED the Chinese character, HAPPY, together, on a red piece of paper and put it on the wall to express the happiness for the two events. And from then on, it has been taken on and became a social custom.