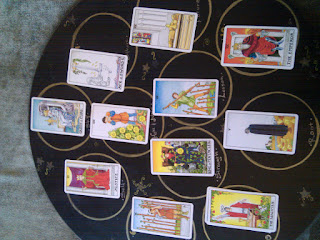 I spent the long weekend attending PantheaCon, one of the largest Pagan gatherings around, held at The Double Tree Hotel in San Jose and hosted by Ancient Ways. Four days of workshops, lectures, rituals, circles and celebrations, attended this year by close to 2,500 folks, fairies, witches & warlocks, not to mention the druids, dryads, nymphs and trolls, but I digress...

Each day poured down rain as I left Santa Cruz, and coming over the mountain on 17 through the fogs began the feeling of moving between the veils of the worlds. On the way to the summit is a large friendly sign with "Jesus Loves You" painted in scrawly letters. "Look, Mom," quips my teenager, "Jesus can be your Valentine for the weekend." This from a girl in love with a boy who sparkles.

I went to two workshops with Mary Greer, the first was 21 Ways to Read a Tarot Card. I pulled VI: The Lovers while my impromptu lab partner, Fedelia, pulled XIX: The Sun. We took turns talking and listening, sharing our hearts and sharing our stories. Luckily there always seemed to be a box of the sacred kleenex around.

The next day Mary gave a great presentation on A Hundred Years of Secrets in the Waite-Smith Tarot which included some members of the audience channelling Pamela Coleman Smith and Arthur Waite. I certainly had an intense visualization of how it must of been for them to work in collaboration and remembered some of my own lessons in co-operation and the fine art of compromise.

Almost twenty years ago now, I hand colored my set of The Daughters of The Moon Tarot Deck, which took me almost four years to complete. I enjoyed the process so much, I started a second set for my partner, whose hands shook from a nervous disorder. We worked together on creating a set - She would pick the colors and I would do the painting. It was a long, interesting exercise in communication for both of us: for example, in some random card I thought the sky should be blue - she would want a purple, orange, red sunset. I had to really listen and see through new eyes. Later I found myself somehow jealous of "her" cards, as the colors were more vivid, and my skills had increased, so they were "better". Ah, the never ending ego...