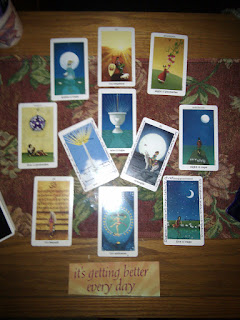 she thought she had a decision
to make...
but it had already been made.
she felt it inside her.
now she just had to admit it.


Recently upon pondering whether or not to contact a certain someone, I found Osho the most convenient of the 17 deck I seem to have collected over the years. My left hand pulled (who didn’t know it) VI: The Lovers. My right hand pulled XI: Break Through. Traditionally the Justice Card (sign of Libra the Scales), Osho instead instructs us to change our break downs into breakthroughs. Venus being retrograde and it being that time of review, review, review, I found myself thinking about spring break up when living in my own private Idaho, in more ways than one.


I moved to Bonner's Ferry Idaho in the bitterly cold January of 1989, living there for almost a year before returning to my beloved Santa Cruz. Less than fifty miles away from the frozen Canadian border, population 2000. My best friend had recently been hospitalized after attempting suicide, and had decided to return to her home town to rehabilitate. She asked me to come with her, and having ended my college classes a semester early, I thought, why not?

Well, considering how much I hate the cold, soon the question was, why? With a wind chill factor registering at 40 degrees below zero, my entire life revolved around getting my friends in California to mail me chai, stoking a wood stove in order not to freeze at night and running a hair dryer over my car engine for 24/7 rather than having my engine block crack. Densely packed snow covered everything, the proverbial white blanket, only a mere 6 feet deep. Interestingly enough, it was that winter I painted my first tarot deck, using water colors to illuminate Ffiona Morgan's Daughters of the Moon , still my favorite deck today, 23 years later.

The only weather more extreme than winter, though, was spring break up - that 6 foot blanket became a six foot moving sheet of ice, churning up everything in it's path. As the creeks and rivers began to thaw, so began the most intense earthly transformations. Asphalt buckled, mountains cracked, and mud became the ruling element. Navigating the roads was treacherous, and mud slides were more likely to close down the schools than any paltry snow day. Chaotic and messy, the sun’s golden rays illuminating the primordial sludge that all is born anew from.

Icicles shifted, melted, and transformed into running streams, babbling brooks, and fast flowing rivers. There is so much power in the melt down, the sudden waterfalls and instant byways as gravity would help sluice down the excess, creating short cuts for more flow. Much like my own tears, expressing my grief, no longer stagnating in sorrow, so too did I find my internal ice-olation shifting and changing in that particular spring time, transforming my thornier parts into the welcoming rose bud, the promise of summer blossoms, the return of joy. Part of the break throughs were the bulbs bursting through the soil, tender shoots reaching for the sun; the dams that had burst free now calming into gentle rivers. The earth truly seemed to shudder as she shook herself awake.

And just what was the third card? Oh, but that’s another story...


THE MOMENT one definitely commits oneself, then Providence moves too.
Whatever you think you can do, or believe you can do, BEGIN IT.
Action has magic, power and grace.
-Goethe