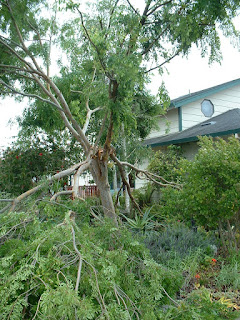 After a windy, stormy week, I came home last Wednesday to discover one of the enormous branches of my Chinese Elm had ripped and broken. It had narrowly missed the roof, broken some of the birch branches, and was smashing the jasmine, ferns and Camila by the side of the house. I looked at in wonder, noticing that the whole tree had shifted - if I removed the branch, the other side might topple too.

Last night's rain let Nature do the pruning for me - another huge branch lay in the street. Thank goodness no one was parked - let alone walking - there. I walked out of the house this morning armed with my clippers, snoppers, and 16" Remington. Yes, I am a woman with a chainsaw, watch out.

Overwhelmed but undaunted, I thought of the Helen Keller quote "I am only one but still I am one. I cannot do everything, but still I can do something..." I figured it would take 3 to 4 days to clear the debris, depending of course on the weather. As I began laboriously to alternate between chainsawing the larger branches into firewood and kindling, the smaller pieces into piles for the dump and piles for mulch, I began to attract the attention of the neighbors.

First came Drunky the Clown, my creepy neighbor who offered to fell the whole tree and chop it into firewood for a twelve pack. "No thanks" I said, thinking, I would have paid him a hundred bucks easy if he had asked for money, but it was so tawdry his request for beer. Not only was it not worth it to contribute to his alcoholism, the thought of spending an afternoon together gave me the serious heebie jeebies.

Next came Ben, a tattooed hulk of a man who lives up the street, coming home from his daily run. We bantered about fitness, biking, and Zumba. "You could ask Scott to help" he quipped, flexing his muscles.

"Yeah, he already offered, but I've already decided that I can chop wood, carry water, drink beer" I said. "Of course, I won't drink beer till after I'm done with the chainsaw." 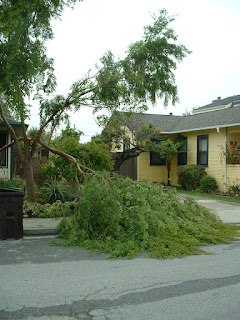 Ben laughed and asked me to go out dancing sometime. "Sure," I said, "They have salsa at the wharf on Sundays." Meanwhile, thinking, okay Coyote, what is this about?

Next came Christine, who kindly offered her husband's help when he came back from taking the boys to a birthday party. I love a neighbor willing to volunteer her spouse, but I wondered how Marcus would feel about it. Anita, who feeds all the cats on the street, stopped to give her two cents, but I also knew that she would be watching me the rest of the day from her front window. Don't get me wrong - Anita is not really a nosy neighbor but a guardian angel, watching to make sure I was okay, weilding a power saw and all.

By now I had filled two green cycle cans as well as creating three more slash piles to eventually haul to the dump, and had created enough kindling to last at least a few winters. It was about 2pm when I stopped to make some fresh coffee, eat a banana and some rye crackers. I started thinking about Feng Shui and how this corner of the yard fell into the helpful people section of the Bagua. "What am I supposed to learn from this?" I wondered. "Let there be a clearing in all my helpful beings, visible and invisible. Let me be a helpful being to my friends and neighbors, clients and community. Let me be open to receiving help now" I prayed.

"Do you want to borrow my double blade saw?" a friendly voice broke my reverie. "Hi, I'm Bill. We have a brand new baby!" My new neighbor was beaming all over. I introduced myself, congratulating him on the family addition, and welcomed his assistance. For someone with a brand bew baby, he had a lot of energy. Maybe he figured it was karma - his wife had just labored, so should he. My hands were sore from the vibrating chain saw, my shoulders cramped from the weight, my jaw tense as I kept reminding myself to let the saw do the work, let gravity do it's job, and keep that scary churning saw blade away from my body, away from my body. I continued to work when Marcus drove up, boys and helium balloons a plenty in the minivan. "What happened?" His kind face concerned. I explained for the umpteenth time the top heavy trees, the storm, the fact that I would have been gardening anyway today, just never imagined this huge of a project.

I thought about the fact that my ex and I planted trees each year on our anniversary, and that interestingly enough, all five had died in the last year. Another Chinese Elm had its roots eaten by gophers and fell into neighbors yard. I cut down three Liquid Ambers when I discovered their roots had grown into my plumbing, causing close to $8000 in repairs last year. And now this one, ripped to shreds by the proverbial winds of change.

I thought about being a gardener and the need to prune things back for fresh growth, a metaphor for my life, my career, my relationships. I remembered when my Dad was going through chemo for lymphatic cancer, now over ten years ago. I wrote a poem then:

I pruned the apple tree
Way back, I said
Bare bones

My father laughed
Slipped off his black wool fishers hat
His skull pale and waxy
Wisps of gray hair, survivors of this blasted land, or
fresh growth struggling to rejuvenate
replenish, refoliate

Me too, he whispered
Bare bones

March 1998
Bill showed up his big ass, gas powered double blade that put my puny Remington to shame. He showed me the clutch and how to fire it up, but I'm sure he saw how intimidated I really felt. "Where should we chop it?" he asked, and proceeded to rock my arbor world. I don't know if I've ever met a sweeter man. So sincere, so helpful. Marcus took over the snoppers while another neighbor appeared with a green cycle can, and in less than two hours the whole tree was gone. They literally saved me days of work, Bill even offering to do a dump run for me. Unfortunately, Drunky the Clown would circle around every ten minutes on his bike and harass us. A stick got caught in his bike wheel, whacking his shin, and he began to threaten to sue me. He was so irate and bitter, ranting on how he had just talked to Ben about me, annoyed that I had agreed to a date when he had been bringing me chocolate covered macadamia nuts from Hawaii every Christmas for the last four years, and wasn't I gay, anyways? Whatever. His bitterness was such an interesting contrast to my other neighbors sweetness, their sheer kindness in helping me out today.

Now I'm exhausted, sitting on the couch contemplating the new view from the window, thinking about giving and receiving help, thinking about pruning things back for fresh growth, thinking about what to make for dinner. Mostly, I have a sense of this is how peace on earth can happen - one neighbor at a time.