The quieter you become, the more you can hear. - Baba Ram Dass

Last month I set off on an adventure - a four day writer's retreat, which was also a silent retreat, down at Mission St. Antonio, just south of King City. I left on a Friday after my last client, turning off the radio after Watsonville, setting the proverbial tone for the weekend. 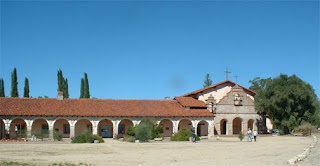 Driving through the golden California hills, here was Steinbeck country - a baking 78 degrees in the valley, cabbages and artichokes filling the fields as I sped down 101. "Bless those hands, bless those backs" I thought, watching the workers, musing on who had picked my food, who had toiled to harvest the grapes so that I could have wine at my table.

I reached my destination after a few short hours, parked the car and meandered off to find my room. After plucking the crucifix from the wall, I made a swift altar to creativity on the windowsill, with various journals, colored pencils, a moon book and a deep red scarf. I added an apple and a pomegranate, invoking the Madonna in my tiny monk's cell. 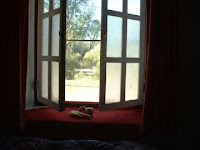 After unpacking my few belongings, I realized I forgot a few essentials: no jacket, no flash light, and no alarm clock. My cell phone was out of service, so I plugged in my lap top despite no internet access, simply to know the time. Indeed, it was strange not to type all weekend, but to journal by hand instead. I meandered around the Mission, exploring the rose garden, taking note of the warnings for rattle snakes posted in the bathrooms.

We had a delicious dinner, simple and filling, seventeen women in complete silence. The crunch of the fresh bread, the scrape of a chair as someone refilled their ice tea, the dull clink of silverware on the plastic bowls as we polished off the hearty pumpkin soup that had been provided.

Afterward, we had our first workshop, our 3 minutes of speech for the day, briefly introducing ourselves and setting our intentions for the retreat. As we sat and meditated before our first writing exercises, I was aware of the sound of crickets, the rustle of paper, the closing door, a distant bell ringing. The theme for the weekend was "Cultivating Lightheartedness."

Walking back to my room, I had to laugh at myself - the moment I saw a cat I broke silence, calling softly to the long haired Siamese - my first thought was how to get it to sleep with me. Over the next few days we became friends, along with her black haired sister. Fierce hunters, these two, soon bird feathers graced my altar, the sacrificial remains of the day.

I was pleasantly surprised by how much I was already enjoying the silence - I felt a deep peace and stillness, a deep relief at not having to entertain or amuse, to counsel or comment. The relief at just being able to eat without interruption, without conversation. I smiled at everyone, and wonder what brought them here...

There is a voice within, that no one, not even you has ever heard. Give yourself the opportunity of silence and begin to develop your listening in order to hear, deep within yourself, the music of your own spirit. - John O'Donohue