Adventures in Maui 3: West Side 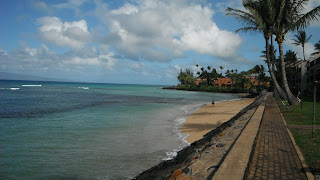 Our west side adventures in Maui started out pretty slow for me. After the long drive the day before from Hana, both my hands had broken out into hives from the medication I am on, which makes my skin ultra photo sensitive. While Chip went snorkeling, I hung out at the Lokelani condo, finished reading my second novel, checking out The Ultimate Maui and playing on the computer.

Thursday we cruised into Lahaina town, which reminded me much of Key West. Bustling, full of color and life, a magnificent Banyan Tree making up a wondrous playground and welcomed shade by the yacht harbor. We went whale watching, seeing close to a dozen whales, distant flumes of water and the occasional tail. Afterwards we stopped at The Cool Cat for salads, meandering down Front Street afterwards to peruse the art galleries before going home to make spinach cheese raviolis in a pesto sauce. 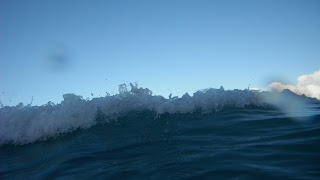 The next day was my one of only my swims in the ocean, as our private beach was still in the shade early in the morning. Donning on Chips UV protecting shirt and goggles, I attempted underwater photography but it was much to murky. While he went oft snorkel more distant and clearer reefs, I bobbed up and down on a friendly sandbar, avoiding sea urchins while trying to capture good photos of waves.

Later we drove up to Kapalu and hiked the oceanic trail. First we encountered the 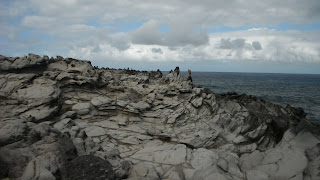 Dragons Teeth, fierce juts of lava that threatened to swallow the ocean. Much to my surprise, I also found a labyrinth had been created on one of the clearings. 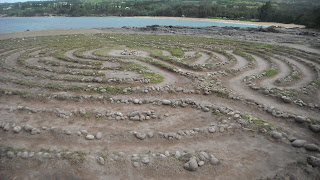 While Chip took photos of the landscape, I did a walking meditation, another incredibly sacred and awe-inspiring time on this trip. We hiked further along the coast line, but feeling overly hot and weary I sat by the tide pools while Chip continued further on. I saw sea turtle come to the ocean surface several times, more gratifying than the whale watching, and took furtive pics of a fisherman who just delighted me for no particular reason. At sunset we stopped at The Sea House in Napili, chomping on yummy salads before going home to cook a more thorough dinner and sing karaoke to our favorite songs on Google Music, repeatedly coming back to Southern Cross by Crosby, Stills and Nash.

Saturday, Chip went zip lining without me, which I had tried here in Santa Cruz and found that the suspension bridges to be simply terrifying. Mostly I just hung out, doing major power lounging and tons of pure nothing, feeling incredibly decadent and fully on vacation. We were invited to a New Years Eve party in another unit, so bottle of wine in hand we went to meet the neighbors and eat luscious pupus. Mostly a tribe from Alaska, our hosts were gracious and kind, jamming in just a ton of people into their condo,  really living the aloha spirit. 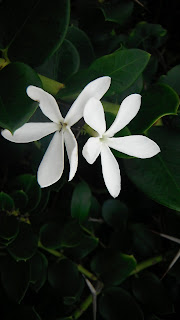 New Years Day we said goodbye to The Lokelani and moved down to Kaanapli Beach to stay a couple of nights at The Whaler, a huge resort complex in the middle of several other resorts. What a contrast from Hana! While we had a ocean view, the sound of the outside fountain, filters, and pool literally drowned out the surf, and the muggy temperature forced us to use the air conditioning rather than leaving the doors to the lanai open as we had done thus far. 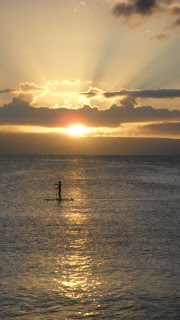 We ate our complimentary pineapple with relish, then drove back to Kapalua to hike the second half of the trail. Moving off the beaten path we discovered wonderful tide pools, full of anemone and urchins, tiny fish and lots of crabs.

Once again we found ourselves hanging out at The Sea House, this time with a wondrous seared ahi salad. After lunch we sat and watched the paddle boarders, wandering the Napali beach and getting quite soaked by the waves. Later, back in Kapali, we cruised the different hotels trying to find some decent live music, ending up at The Tiki bar listening to a slack key guitar version of the twelve days of Christmas. 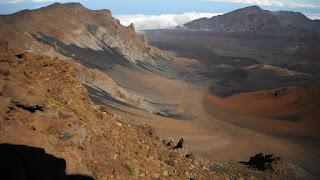 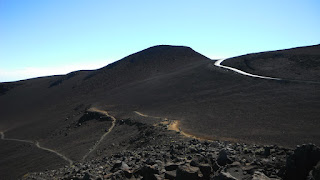 Monday we set off for central Maui to hike the Haleakala crater. A series of switchbacks took us up 10,000 feet, past the clouds and droves of bicyclist tours who had started earlier in the day at the base of the national park. The temperature dropped steadily, going from balmy 80 degrees to a very crisp 57. The views were amazing, the terrain quite the desert, looking like what I imagine Mars must be like, deep ferrous reds along with black lava, only the occasional silver sword plant dotting the landscape. The folks at the visitor center were extremely kind, and driving back down we blessed to see Nene, the local goose. We ate an extremely late lunch at the Kula Lodge, where we has the best salads, one spinach and one organic greens, along with my first lavender martini, a welcomed treat after a long day exploring the volcano.

Tuesday was our last day. We packed up and headed to Kahului airport, where we met Alex, the friendliest porter who actually hailed from Florida. We hung out at Stinger Rays, drinking Blue Hawaii's and Pina Coladas, feasting on nachos with pulled pork, looking a photos on the computer and patiently waiting for our departure.

What a wonderful experience. My first time in Hawaii was exceptional, seeing both sides of the island really felt like two vacations rolled into one. The people were so nice everywhere, the weather exceptional even when raining, and I look forward to a time of returning to this place of paradise.

Yes, I loved Maui, now I return to my own paradise, Santa Cruz, and my cats who say "Meow-y"