Pick a card, any card: The Playing Card Oracles 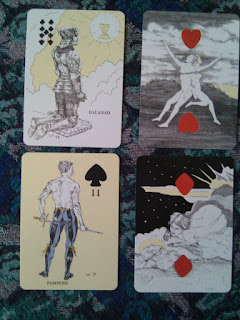 By their numbers, suits and pictures
The cards communicate
And begin to tell their story
Each time we shuffle fate.

The Playing Card Oracles Divination Deck by Ana Cortez and CJ Freeman has a regular deck of 52 playing cards, each transformed by original artwork to invoke the wisdom of the ancient oracles. Here, the LWB is definitely our friend and guide to interpreting the archetypes and symbols of each card and revealing hidden meanings. With irrisitable names such as 10 of Diamonds, Tendra and 9 of Spades: The Throne of Spiders each card beckons for more investigation. Ultimately though, as the author states, "let the images, the colors, and the total picture of the cards in your layouts inspire your interpretations. The magic is inside *you*."

Very clearly not a tarot deck, instead the author links the 52 cards with the calendar and 52 weeks to a year. Cortez presents two spreads, the Present Spread and the Cats Spread, both of which use the cards in a way to look at the weeks and months to come.  She also suggests to look at the 4 card spread as if looking at a person, the bottom card relating to issues of the earth, feet, home, career, possessions etc of a foundational nature; the next card relating to water, the torso, love and emotions; the third card speaking to the air, throat, ideas and communication; and the top card representing fire, the head, what is dominating the reading and what the seeker is most aware of in the current situation.

After shuffling the deck seven times, focusing on what was grounding me (feet), what was moving me (heart/womb/torso), what was I talking about/listening to (throat) and what was most on my mind (head) I pulled the following cards:

For my first card I pulled 11 of Spades, Pampero, a shirtless man in striped tights is holding a thin épée loosely in his hands, looking somehow both amused and battle scarred. "This Jack makes a loyal ally or formidable adversary. Unlike his one sided brother in hearts, La Hire, who hides his other side, Pampero seems to be lacking in any great dimension."

The second card was 9 of Clubs, Galahad, a knight in full armor kneels upon a cushion win the clouds while gazing upon a Grail centered in the sun. "...associated with idealistic vision, and the tendency to become disconnected from reality." 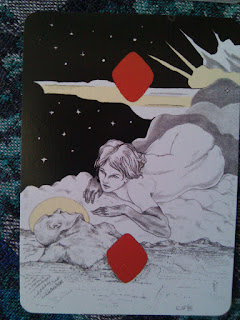 The next card was 2 of Diamonds: The Rivals.  My first instinct was to say a succubus in evening gloves lounges on a cloud while a man gasps for air below her, his body half buried in the earth. "Rivalry or clash within our lives can create the push that brings our personal best." originally the card I resisted the most when I pulled it, this lesson actually rings the most true in my life right now.

The last card was 2 of Hearts: The Lovers. A man and a woman are back to back, bound together by ropes, both at the chest and one arm at the elbow. Each has their free arm outstretched, pointing or beckoning to something beyond our sight. "Two hearts are bound together in a relationship, tethered by the sweet and bitter cords of emotion." for what is most on my mind, this certainly ran true.

A very different reading from the upbeat, optimistic Art of Life reading, I certainly know the perfect goth person who would enjoy these cards and get a lot out of them.  There is also a full length source book available, The Playing Card Oracles by Ana Cortez, presenting the history and methodology for card reading. Beautifully illustrated by her father, C. J. Freeman, who also provided stories and poems for the book.