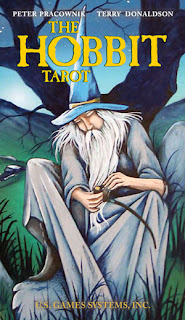 Who could resist a hairy toed tarot? The Hobbit Tarot created by Peter Pracownik and Terry Donaldson follows Bilbo Baggins in his adventures as a parable for our own quests and challenges. The mythic world of JRR Tolkein combines with the symbology and system if the tarot, which represents our sties to self actualization.  As the author says,  "the beauty-and genius- of the Tarot is that as a set of simple pictures it holds universal appeal. It provides a very simple, yet profound way of looking at ourselves... (which) can lead to greater understanding and self-realization."

Three new card spreads are presented: a twelve card "Ring of Gollum" spread that puts the card in a circle that follows the houses in an astrology chart; Then a nine card "Sword of Aragon" spread, which looks at both past influences and future expressions; and a very pleasing fourteen card spread, where the cards are laid out in a spiral and read in a storytelling fashion, starting at the center and moving outwards.

This is a wonderful deck for anyone who was entranced with Lord of the Rings. The 96 page booklet is very detailed in it's description of the card and it's divinatory meaning, including reversed cards. Shuffling through the cards face up, the images reminded me of first reading of the epic back in the fifth grade, and I thought about my own journey on the earth over the last forty six years. I cut the deck into three, pulling cards: 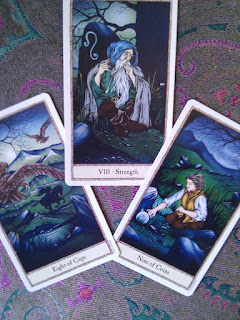 Where am I now: Nine of Coins -  Bilbo is seen with the Arkenstone out under a new moon, making the difficult decision to turn it over to the Bard. This card brings a sense of arrival, achievement, heightened self reliance and self worth with a warning against excessive enjoyment.

Where am I coming from: Eight of Cups - two eagles swoop in the sky while the silhouette of a horse and rider head towards the mountains. The traditional card of retreat or withdrawal, the divinatory meaning speaks to looking for something on a deeper level, commitments, and trust in being guided.

Where I am going: VIII - Strength - Gandalf Leans against a rune stone, taking a moment to fill his pipe and find the strength in resting awhile. The message here is take control by accessing inner strength and a need fir determination. A gentle touch combined with emotional strengths can be a way to deal with problems.