The Ancestral Path Tarot by Julia Cuccia-Watts draws from four different ancient cultures in its' depictions of archetypal images found in the tarot. First published in 1995, this multicultural deck is a welcomed addition to my personal collection. I am always leery of cultural appropriation, however the respect and inherent universal messages that are truly cross cultural give new meaning and insight for the querent. Cuccia - Watts writes in the little white book, "We are all embryonic ancestors, similar to the fetus in the Hanged One image in the Ancestral Path Tarot. Through the placental cord of cultural transmission, we imbibe the world view of those who shaped and adapted it. We are nourished on the legacy of their belief systems." 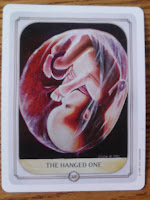 Four ancestral cultures at specific historical times are used in creating the minor arcana - the Egyptian nineteenth dynasty of Ramses II for staves; Arthurian Britain for cups; post-contact America for Pentacles (called sacred circles); and the Japanese feudal era for swords. The major arcana are a mix of many cultures, including modern day, most notably the fool card portraying a woman doing a tarot reading, most likely a self portrait by the artist, and the judgment card which has a surreal image of a woman floating from her bed through a portal into another dimension where a helping hand reaches for her. 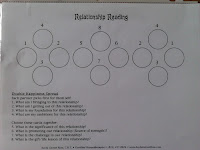 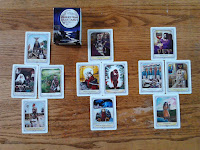 After pulling each card, we would describe what each saw in it to each other,then read the lwb out loud, and last tell each other what personal meaning we got from each card and how we saw it as a reflection of our relationship. It is always interesting to try to pull cards together, and on the challenge card my partner suggested that we pull the card with our lips. We spread the cards out on the coffee table and had a fun time bumping noses while giggling and trying to pick a card together with our lips. While usually I don't recommend licking your tarot cards, certainly this added a lot of joy to the reading! 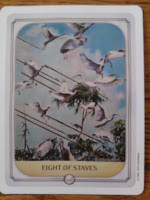 My partner aka The Tarot Skeptic really loved these cards and commented on how many he thought were beautiful, in particular he liked the Eight of Staves, which has eight ibis' flying across the sky, giving a real sense of what is up in the air. There is so much detail on every card, especially in the expressions of the faces, from the ennui shown on the Four of Cups to the mystery of the Queen of Cups, leading one to ponder as to what is really going on inside, both in the card and the querent.

Overall I am quite impressed with the Ancestral Path Tarot and look forward to working with much more, both for my personal readings and for tarot readings with my clients. There is some wonderful descriptions in the introduction of the lwb of the four suits and in particular the symbolism used for the aces, but the actual card descriptions are fairly generic. I would love to get a companion book to go much further into the mythology, legends and history of each of these cultures. As Cuccia- Watts states, "The emphasis on the path of the ancestors...is not the anthropological emphasis on the cults of the dead, but on a living tradition from all human cultures available for us to factor into our world view."