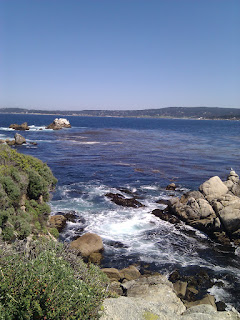 My summer retreat started early, on Thursday, after dropping Amber off at her other parent's, knowing she was also getting ready for her big adventure in Europe. I spent the afternoon in relative silence, exchanging a few words with a neighbor, chatting with the cats, mostly fettering around, packing for the weekend. I had been quite surprised by the last minute email from Chip deciding not to go on the retreat, but was glad that he was taking care of himself, taking care of business, and most importantly, willing to look in on the cats over the weekend.

Friday I cleaned the house, mowed the lawn, did laundry and dishes, put clean sheets on the bed, not just for Chip to enjoy but for me to come home to order and grace after the retreat. I gave up on writing my final paper, realizing quite simply I had more research to do than could accomplish in a few hours,and went on a walk instead, depositing checks at the ATM and stopping for a few goodies from New Leaf before heading down the coast.

Despite leaving early, traffic was ridiculous at 2pm, construction creating bottle necks and head aches as I contemplated alternate routes. I decided the truth was I had nothing else to do, plenty of time, and that this was a part of the retreat, sinking into my thoughts rather than getting distractedly the radio, the hum of the air conditioner my only tune. I found myself in a deep fantasy of our wedding day, now that our plans had changed quite drastically from a large celebration with friends and family to what I had originally envisioned, a completely private ceremony between the two of us. My fancies ranged from trekking out to Point Lobos to skydiving in Hollister, ballroom dancing in the city to quiet beaches in Kauai.

After twenty minutes of stop and go, traffic let up after Park Ave, creating smooth sailing for the rest of the two hour trip down the coast. I waved at my parents house in seaside, noticed the driveway to highlands inn, thought about stopping at the Lucia lodge, and suddenly there was the turn into the New Camaldoli Hermitage. The two mile driveway switch-backed over the golden hills bursting with life - Scottish broom, purple sweet peas, pampas grass cheering me on as red tailed hawks swooped overhead.

I went into the bookstore to register, and to my surprise the assistant on duty not only lives in Santa Cruz, but we live on the same street. Small world, interesting way to meet a neighbor. I drove my car down to the hermitage, found my room and unpacked. I sat outside in my little enclosed garden, enjoying the late afternoon sun. A blue jay flew down from the fig tree, looked at me, ruffled it's feathers and pretended to be hurt. I know this bird ruse to lure predators away, and sure enough as I peered up into the leafy green foliage I could see a nest.

Little peeping noises commenced, and as I sat half a dozen teeny fuzz balls began to appear on the tiny trail by my garden. After a few minutes a mama quail appeared, saw me, and quickly ushered her young into the bushes. Hummingbirds came to sip from the orange monkey flowers as I looked across the ocean.

After a light supper, I walked over to Scholastica were the writing workshops were held. A dozen women sat in a circle, each with several journals piled at their feet, candles on the table flickering over an altar of stones, statues, seashells and pinec ones. I realized that I only had a couple pages left in my journal, so the rest of the weekend would write in old journals on random blank pages, something I found rather pleasing in disrupting any linear conceptions of time. 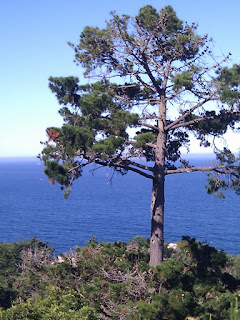 Saturday I woke up early and started reading a book my daughter had recommended. At 9am we had another workshop, reviewing our journals for themes. After lunch I spent the entire afternoon in my little garden, devouring the four hundred page book. After finishing it, I decided to walk down the two mile driveway for some exercise. Going down was easy enough, but hiking back was way more of a struggle, and I had to stop it seemed every ten yards or so, resting in the shade of tree, photographing the purple sweet peas, California poppies and live oaks. We had another evening workshop, after which I was quite content to simply go to bed.

Sunday I ate quiche for breakfast, then went to the morning session. The rest of the day was evenly divided between reviewing old journals, collating in scraps of paper that had accumulated over the years, and creating a healing mandala for my new blended family. I had a lot of satisfaction in  ripping out some pages and  destroying them, no need to cling to the pain of the past. After dinner I started packing, already thinking about the cats, emails, the rest of my week, reminding my self to stay present and enjoy the last of my stay.

Monday morning I woke up early again, took a shower and finished packing up the car. I took a shorter walk to stretch out my calves, still aching from the hike up the hill on Saturday. The fog filled in the valley and there was this feeling of looking down into the clouds, pale pinks and golds dancing in the snowy whiteness, the crisp blue sky above. Wafts of mists would come and envelop me, not the least bit cold, I felt like I could take bites our of the fog, feed myself on the droplets of moisture. Circling back around to the hermitage I found a picnic table to sit and contemplate, writing down my notes for the weekend, eager to share them with Chip after getting back home to Santa Cruz.